As announced in September 2014, Chrome version 42 will start to block mark SSL connections using the SHA-1 algorithm as insecure, with a big red cross in the browser.

Update #1: this article originally mentioned Chrome blocking SHA-1 certificates. Chrome will mark them as insecure, but won’t actively block the connection. More in the post below.

Update #2: Chrome 42 is now the default and is auto-updated on all clients. SHA-1 certificates are now marked as insecure. (Chrome Release Blog: the Stable channel has been updated to 42.0.2311.87)

Chrome v42 is now publicly released. The browser now starts marking SSL certificates that still use the SHA-1 algorithm as insecure with a big red cross.

The web browsed with Chrome beta is a scary place. (Since v42 SHA-1 certs valid past 2015 are marked insecure.) pic.twitter.com/cLSNFJxOQH 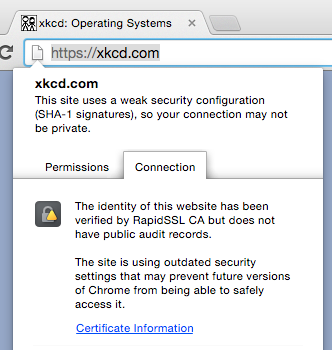 That same site is showing SSL certificate errors on Chrome 42. 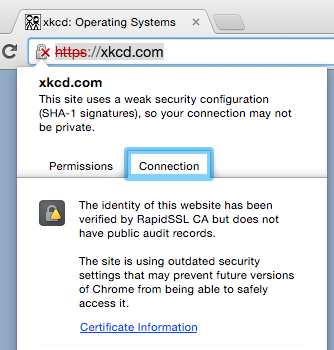 If you haven’t already, check your certificates. If they’re still using the SHA-1 algorithm, ask your SSL provider for a re-issue (hopefully free of charge) using a SHA-256. There are some additional rules on when SHA-1 certs are blocked shown as insecure, and when they aren’t, depending on the expiration date.

The tl;dr: only SHA-1 certificates with a validation date > 2015 are reported as insecure.

The problem is, it’s not only your certificate that needs to stop using SHA-1. Every intermediate needs to be updated as well. In the case of XKCD’s site, their certificate was correctly using a SHA-256 algoritme, but their intermediate isn’t.

As I’ve said before, the chain of trust is only as strong as its weakest link.