Why your government isn't acting on the Corona/COVID-19 threat

Important note: this post is written by me, an IT professional. I’m no virologist or medical professional, but I have been obsessively following the news and believe to be reasonably well literate in the matter. The post conclusions contain speculation on my part.

By now, you’ve heard of the Corona virus, otherwise known as SARS-CoV-2 or COVID-19.

You’ve probably read that the World Health Organisation labelled it a pandemic. At this point we officially have 2 pandemics ongoing: HIV/AIDS and COVID-19.

You’re reading about countries that are taking extreme measures, like Denmark closing all schools, next to Romania, Italy, Japan, South Korea, …

Update: Belgium has, as of March 12th, also closed its schools and public activities.

Why aren’t some countries acting? This question has kept me occupied for the last few days, and my way of processing it is to write about it to find a conclusion.

The balancing act of exponential infections

I’m guessing you’ve seen the following graph by now. There’s a limit on the medical capacity in any country, and the new virus has the ability to exceed that capacity.

By now, it’s clear that most people will at one point get infected since the virus can survive on surfaces for up to 3 days.

To most, it will be harmless and they’ll recover. To a minority, it’s fatal. The current CFR (Case Fatality Rate) hovers between 1-3%, depending on who you ask.

So if everyone is going to be infected, we have to balance the medical capacity with the amount of infections.

One approach is an initiative called Flatten The Curve, and it makes sense. Spread it across time as long as you can, to avoid overloading the medical capacity.

How flat should the curve be?

And this is the point that confused me: if the goal is to flatten the curve, why aren’t most countries flattening right now?

The way I see it, there are 3 ways of dealing with it.

Red is bad, we can agree on that.

Blue is what’s being promoted through Flatten The Curve.

Why aren’t we going for green though, that seems even better?

My conclusion is now that I’ve been looking at these graphs all wrong. The data in it is probably right, but the axis aren’t labelled properly.

To let it make more sense (at least, to me) I renamed the axis.

The balancing act isn’t about infection numbers vs. time.

It’s about deaths vs. economic cost.

Now it makes sense to me.

Economically, the best action would be to get this all over with as soon as possible. Follow the red curve. The deathtoll would be immense.

If we prioritize humans, the best action is to follow the green curve. Spread it as far as possible, give everyone the highest chance of survival as the impact on the medical system is spread.

The problem is that we aren’t just spreading it across time, we’re increasing the economic burden and cost.

How long can schools stay closed? Who takes care of the children? Parents stop working, lose income, work doesn’t get done, supply chains halt, … the total impact is immense as it could spread to food & medicine supplies.

This is why your government isn’t acting now

It isn’t time yet.

Optimal, according to our government, is a balancing act between the amount of deaths they’re willing to tolerate vs. the economic impact for life after Corona. 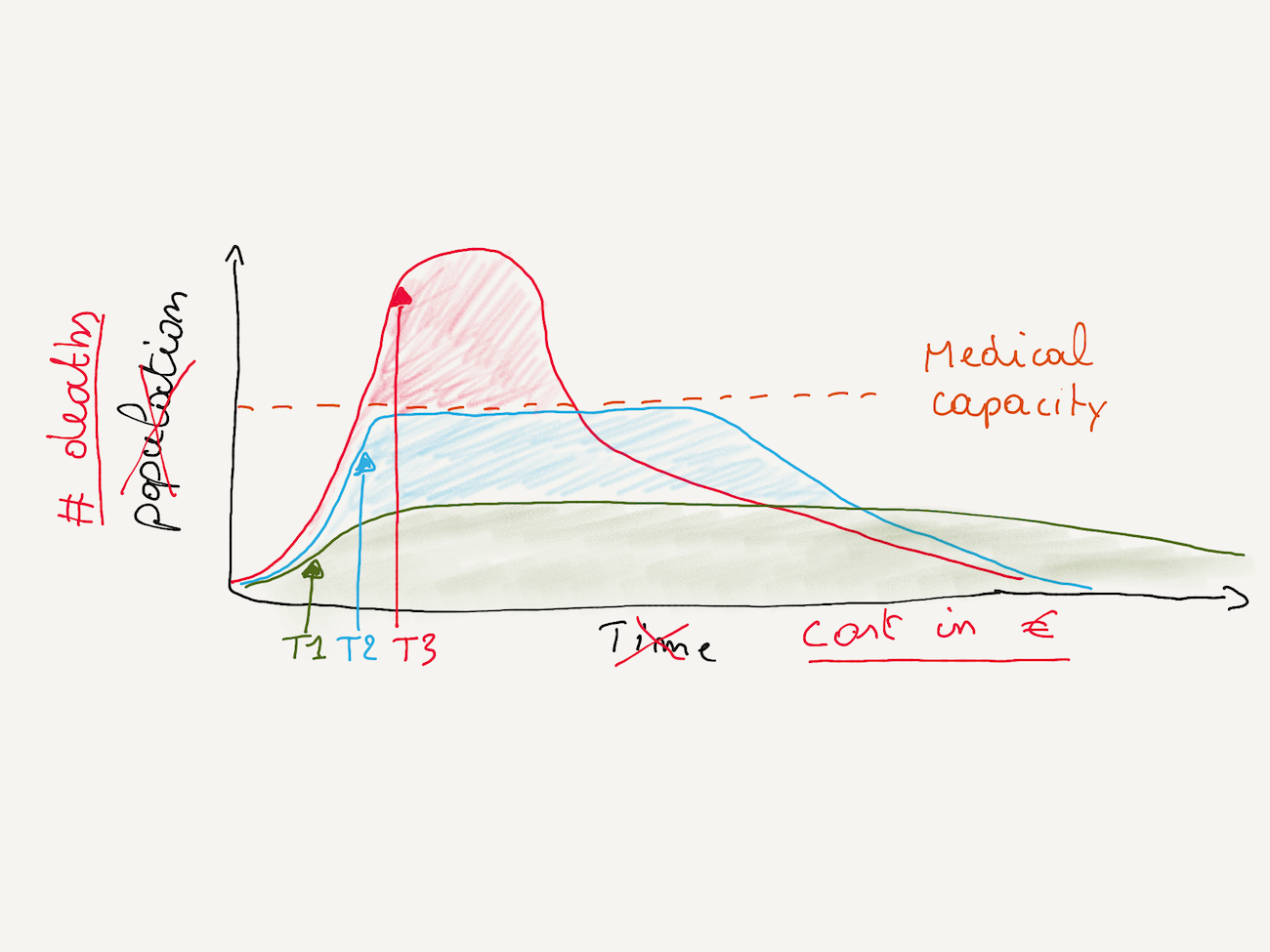 If they act too soon (= T1), chance of an even greater economic recession increases.

If they act too late (= T3), too many people would die and you risk mass-protests, outrage, violence and what-not against the government.

This whole situation is many things, but it certainly isn’t an easy balancing act.