What I’ve found when talking about PHP session locking is that half my conversations revolve around “oh I remember PHP session blocking, it cost me a couple of days of my life but seriously improved my applications’ performance once I avoided them” or the other end “what the heck is PHP session blocking?”.

Specifically, the locking mechanisms involved in PHP sessions aren’t clear to everyone and can cause slow applications if you don’t take them into account.

It doesn’t have to be a problem though, if you’re aware of what goes on behind the scenes you can anticipate this behaviour in your PHP applications and avoid it altogether.

What happens when you call session_start()

Let’s take a basic PHP configuration as an example: whenever you start a PHP session, PHP will create a flat file in the session.save_path path, this defaults to /var/lib/php/session. All session data is stored there.

If your user didn’t have a session cookie yet, a new ID will be generated and the user will get a cookie set on his machine. If it’s a returning user, he’ll send his cookie ID to your webserver, PHP will parse it and will load the corresponding session data from session.save_path.

That’s session_start() in a nutshell.

In a slightly more complete example: here’s what happens behind the scenes when a session is initiated in PHP.

Whenever you start session_start() (or when PHP’s session.auto_start is set to true, it’ll do so automatically in every PHP script), the OS will lock the session file. Most implementations use flock, which is also used to prevent overlapping cronjobs or other file locks on Linux.

From the Linux machine, a lock on the session looks like this.

fuser reports the 3 PIDs of processes that have (or are awaiting release of) this file locked.

lsof reports you the PID and command that holds the current lock.

That lock is kept on the file until the script ends or the lock is purposely removed (more on that below). This acts as both a read and write lock: every attempt to read the session will have to wait until the lock is released.

The lock in itself isn’t a problem. It’s a safeguard to prevent writes to the session file from multiple locations, possibly corrupting data or removing previous data.

It becomes a problem when a second, concurrent, PHP script tries to access the same PHP session.

In case the above table isn’t very clear:

In most scenarios, this makes PHP behave as a set of synchronous scripts for the same user: one executes after the other, there are no parallel requests. Even if you tried to call these PHP files via AJAX.

So instead of having both scripts finish in around 350ms, the first script finishes in 350ms but the second script takes twice as long and runs for 700ms because it had to wait for the first script to complete.

If you’re looking for a quick fix and think “I’ll just store my sessions in memcached", you’ll be disappointed. The default configuration of memcached uses the same, safe, logic as described above: sessions are blocking as soon as one PHP call uses them.

If you’re using PHP’s Memcached extension, you can set the memcached.sess_locking to ‘off’ to avoid session locks. Default value is ‘on’, which makes it act like the normal session handler.

If you’re using Redis, you’re in “luck” (*) because the redis session handler doesn’t support locking yet. With Redis as a session storage backend, there will be no locks.

If you’re using MySQL as the session backend (like Drupal does), you have a custom implementation: there’s no default PHP extension that lets use MySQL as session storage. Somewhere in your PHP code there’s a function call to session_set_save_handler() that describes which class or method is responsible for reading and writing your session data. That means your implementation decides whether sessions are blocking or not.

It may look like I’m being overly negative on this behaviour, but I’m not. It’s just behaviour you should be aware of. It’s actually a good thing it exists, too.

Imagine the following scenario. This shows where it can go wrong. If there would be no such thing as a “session lock”, this would happen if 2 scripts are executed at the same time on the same session data:

What value is in the session?
The value from script 1. The data stored by script 2 is overwritten by the last save performed in script 1.

This is a very awkward and hard to troubleshoot concurrency bug. Session locking prevents that.

But you may not want this. It’s mostly a problem when writing session data. If you have a PHP script that only reads session data (like a lot of AJAX calls would do), you can safely read the data multiple times.

On the other hand, if you have a long-running script that reads the session data and alters the values, but a second script starts and reads the old, stale, data – it can also cause problems in your application.

In PHP, there’s a function called session_write_close(). It does what its name implies: it writes the session data and closes the file, thus removing the lock. In your PHP code, you can use it like this.

The above opens the session (which reads the session data into $_SESSION), writes the data to it and closes the lock. From now on, it can’t write to that session file anymore. If more $_SESSION manipulations happen further down the script, those changes won’t be saved.

Since PHP 7 however you can set additional options when you call session_start();.

This is the rough equivalent of:

It reads the session data and immediately releases the lock so other scripts won’t block on it.

Demo: how slow is slow?

Update: sorry, the demo-site is offline, you can look at the Github Repo to host it yourself.

It’s plain and ugly, but it shows what goes on: . 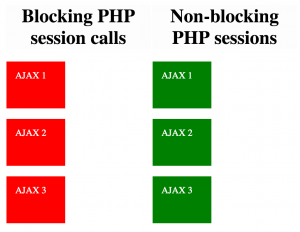 Click the image or the link above to see what it does in reality.

If you’ve been bitten by these PHP session locks, let me know. If you found an original way or workaround to resolve your particular problem I’d be even more interested!